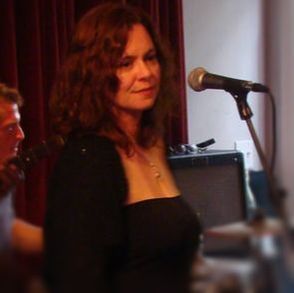 Carolina Restaino - Lead Vocals
Carolina has been singing longer than she's been talking.
She started humming tunes in the bassinet, and hasn't stopped.
She sang first soprano in H.S. Choir and Theater, performed in many bands in the New York area, and recorded with Richie Cannata of Billy Joel fame. Most recently she has performed with The James Montgomery band.

She has played her original music throughout New York and
New England and was the driving vocal force behind the
Atlantic Records label interest of the band "Rum Junction"
in which she and her then boyfriend, now husband Steve fronted.

Carolina dabbles in piano, acoustic guitar, ukulele, and anything
else she can get her hands on, but uses them merely as tools to
write melodies to her intelligent, thought provoking lyrics.
She writes with her husband, as well as Judianne Antonucci, and Sam Simcoe.

In 1996 Carolina was fronting the band "Think Out Loud" in which she and friend/ bass player Tommy Ambrosio were the shining stars, as writers and performers.
Steve stole her from the band, then stole her heart. They have been performing together ever since.